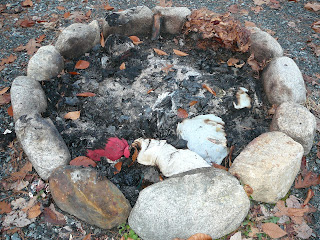 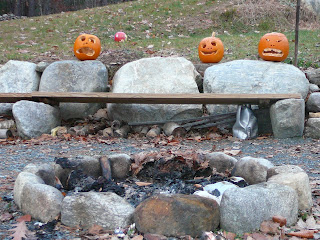 We had Bonfire Night on Saturday November 8th.. a little late but we still had it.
Mother Nature as always played the devils advocate and decided to let it stay dry until fire lighting time when she threw a huge pour down tantrum.
Half of our friends are British so the brollies came out and the Americans followed suit as we all stood around our campfire burning our guys. A bit like the 18th century times I guess!
A similar situation to when people go to Blackpool for the day with their butties & flask of hot tea. It may be pouring down & they never get out of the car yet they had "a grand day out at the seaside."
The British spirit will not be broken by a spot of rain or two (million!) Apparently neither will the Americans!
A few guys did resemble the odd political figure or two, apparently this can create a pleasing cleansing effect on ones body.
The chilli & jacket potatoes were flowing and I even scrounged up some Thorntons treacle toffee which apparently was out of date but still disappeared!
The following day all that was left in the fire pit were two stubs of someones legs........legless...similar to how Sir L felt that morning!
Posted by Daffodilly at 1:43 PM

Reading this post suddenly made me realize that I haven't celebrated Bonfire Night since before I moved to the US - in 1985!

My daughter did a thing at school about foreign traditions, so chose Bonfire Night. Her friends were all completely creeped out by the idea of burning an effigy. I had never really thought of it like that before!

Almost American you have to come over next year.

Expat Mum...its times like this that you do query your own culture!

Ooh - thanks for the invite!

My son and his fiancée came to visit a few months back, and in our discussions of UK/US differences, Guy Fawkes Day came up. She is a devout Catholic, and was absolutely gobsmacked at the true, traditional beginnings of the holiday being about burning Catholic effigies. Talk about someone creeped out (and glad her future husband has no ideas about following his dad back across the pond).

How lovely to mark the occasion. I do miss Bonfire night. Never thought about the effigy thing before though. Good point.

Daffodilly
Emigrated from Manchester in the UK 14 years ago to NH in USA. Married with 3 darling (occasionally) children.